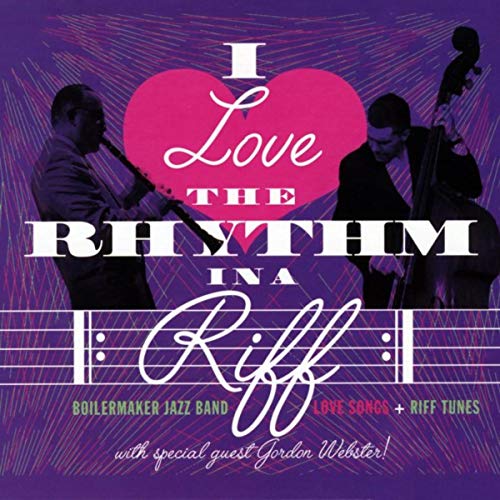 The Boilermaker Jazz Band recently released their newest album, I Love The Rhythm In A Riff, to celebrate 30 years together as a band! Can you believe it? I can’t. Paul Cosentino, the band’s tenor and alto saxophonist, clarinetist, and bandleader, offered to send a copy of the new album to any swing DJ who told him they wanted one, and I couldn’t write my email fast enough!

During the wonderful but all too short time known as the Swing Era, band leaders, jazz musicians, and singers were superstars…All of the bands had a book of great tunes for people to dance and listen to. Often filling the book was a collection of catchy riffs – songs with snippets of repeated melody that get stuck in your head and are great vehicles for jazz improvisation. Another requirement was wonderful vocal numbers – usually about love…This recording brings to life those two seminal categories of swing music.

The album overall has a bright, energetic feel, with a number of songs fast enough for balboa and competition-level Lindy Hop. Special guest Gordon Webster joined the usual suspects in the studio, and his piano solos shine on every track. I’ll go through the songs individually and note what I like about each.

This cover of the popular jazz standard “9:20 Special” has marvelous solos from several band members, including Tony DePaolis on bass and guest Gordon Webster on piano. It chugs along just like the train it’s named after!

Paul Cosentino leads the way with vocals on this sweet track. Its gentle movement is accessible for beginners, but there’s some expressive piano in there from Gordon Webster for more advanced dancers to play with.

I love every version of this Johnny Hodges tune I’ve ever heard, and this one is no exception! The melody is just so bright and engaging – it was hard not to get up and dance when this came through my headphones. Gordon Webster does some mindblowing solo work on this track – especially admirable at this tempo.

This song feels like walking through a garden in the sunshine on a day when you have nothing else to do. It’s very slow, and that only adds to its loveliness – Jennifer McNulty on vocals doesn’t hurt, either.

Normally, I’d rather dance to something faster – but if anyone could change my mind, it would be the Boilermaker Jazz Band. Artful piano notes from Gordon Webster sparkle over a rumbly rhythm, held down by Tony DePaolis on bass and vocals, and Thomas Wendt on drums.

Jennifer McNulty and Paul Cosentino share the mic on this tune, made famous by Tommy Dorsey and Frank Sinatra, according to the album liner. I enjoy Jeff Bush’s trombone solo, as well as the smooth and easy pace.

This Duke Ellington instrumental features a driving beat, helped along by Paul Cosentino nailing his saxophone solos, and develops into a foot-tapping swinger by the end. I’d love to DJ this song for balboa!

The word “pleasant” may feel a bit bland, but it truly captures the vibe of this song – chill, but kind and sweet. Jeff Bush has a lovely trombone solo, and Gordon Webster’s piano is understated but perfectly fits the mood.

I love Gordon Webster’s piano opening for this tune – it sounds silky and sneaky, and makes you want to get up and start bouncing along in time. The riff develops with Paul Cosentino’s clarinet whistling along and Jeff Bush doing some dope mute work on the trombone.

As soon as I heard this song, I knew I would be humming the melody and mumbling the words for weeks – and I was right! It’s catchy as all get out, and the lyrics are beautiful to boot. Jeff Bush’s vocals fit right in with the easy beat from Thomas Wendt on drums and Paul Cosentino on saxophone. Tony DePaolis’ bass solo on this track is not to be missed.

This song opens with a relatively quiet riff that belies its tempo. It takes its time, working first into a light melody with Paul Cosentino on clarinet, and then developing into a full-blown swinger with an energetic trombone solo from Jeff Bush. Gordon Webster plays supportive background piano that helps fill out the sound.

Jeff Bush opens on trombone, followed by Jennifer McNulty’s soaring vocals, supported by Paul Cosentino whistling along on saxophone. This song’s length would make it perfect for playing in a lesson context and having dancer switch partners every minute or so.

I’ve been a big fan of Erskine Hawkins’ version of “Tippin’ In” for some time, so it was refreshing to hear this new take on it. The main melody happens on Paul Cosentino’s saxophone, and boy does he have fun improvising! Jeff Bush on trombone, Gordon Webster on piano, and Tony DePaolis on bass all contribute engaging solos.

Jennifer McNulty leads with vocals on this track, while Paul Cosentino pipes along on clarinet and Jeff Bush adds in some delightful trombone. This is the only track on the album that falls in the 140-170 BPM range, so I anticipate I’ll end up playing this one a lot!

This track is worth listening to, if only to hear Paul Cosentino and Tony DePaolis scatting together! Jeff Bush and Gordon Webster bring the heat with racing trombone and piano solos, and Thomas Wendt has a dope little drum solo midway through. The energetic instrumentation brings it together as a perfect finale for the album.

I noticed as I was writing this up that one of the strengths of the Boilermaker Jazz Band is that, in spite of having a small group – only five members, plus Gordon Webster – they make excellent use of every musician – they all get frequent solos, even while keeping their songs down to danceable lengths, and they play off each other incredibly well. I hope you check out I Love The Rhythm In A Riff, and enjoy the music as much as I did!

Everything on this blog is uncopyrighted. You can freely use and share anything you find here, and while crediting me would be nice, I won’t sue you if you don’t.